Invitation to tender: the presentation phase.

The first two articles in this series looked at writing an Invitation to Tender (ITT) based upon a written requirements specification and then at reviewing responses to it. This one looks at the next stage; having supplier presentations to examine those responses further and hopefully to choose a preferred option. To do that properly, only a small number of bidders can progress to this stage. For companies looking at Tier 2 or Tier 3 systems (see another blog on this site for an explanation of ERP 'tiers') that will be three or four at most because more than that will just cause confusion. But for companies looking at Tier 1 systems, it is likely that the previous step will have narrowed the field to just one system. It is important, though, for companies to remember that, even when they have picked a system, they almost always have choices when it comes to selecting a company to work with them on implementing that system.

For companies to gain maximum benefit from this phase, they must be clear about what they expect from suppliers and must also understand how prospective suppliers view the process also. Most companies will hope to see at least a 'prototype' of the system, preferably using their data, and will also be keen to gauge the knowledge, experience and competence of potential implementation partners.

Taking the software first; these tasks are achievable with Tier 3 systems, difficult with Tier 2s, and impossible with Tier 1s. The reason is that Tier 3s pretty much work 'straight out of the box' because they have limited configuration options. They do what they do very well but users do not have a lot of choice in how the system is set up and run. Tier 2 systems, though, generally have a lot of options and choices to ensure a better fit for individual user companies (typically hundreds or even thousands) but with that flexibility comes a price and, even though many default settings will be adequate for demonstration purposes, it will still mean many hours of considering, selecting, and configuring customer-specific settings.

Things get even more complex with Tier 1 systems, where teams of consultants typically spend weeks or months on system configuration, even ignoring the fact that, at this level, hundreds of thousands of dollars, and in some cases millions, are likely to be spent on bespoke modifications to the base system: obviously not something that can be done prior to contract signature. True; some Tier 1 suppliers claim to have “industry templates” to' allow quicker implementations but few are keen to demonstrate these because, even within the same industry, many companies have different ways of working and a configuration that is acceptable to one company might be viewed by another as being unacceptable; so the risk is too high. Suppliers try to get around the problem by claiming that their systems conform to 'best practice' but just who decides what best practice is in any industry is not always clear.

Moving on to evaluating the supplier's consultants, again this is achievable with Tier 3 systems but increasingly difficult when moving towards Tier 1 because two factors come into play. The first is that the Tier 1s and Tier 2s normally employ specialist pre-sales consultants whose job it is to interface with customers all the way through to contract signature, at which point they hand responsibility to implementation consultants and move on to the next sales campaign. So the consultants that companies see before contract signature will not be the consultants that they will be working with subsequently.

The second reason is that, although Tier 3 suppliers generally require a team of 2 or 3 consultants for an implementation, Tier 1s need a team that will range from a dozen to over a hundred, with Tier 2s falling in the middle, and suppliers simply cannot afford to 'reserve' those resources in the hope of winning specific contracts.

Moving to a supplier perspective; knowing that they are limited as to how much software they can show, they will be focused on selling themselves as knowledgeable and experienced implementers of the systems they are offering. So customers can expect to see more detail about existing customers lists, size of organization and numbers of trained consultants, along with samples of project documentation and project procedures that they will actual software. It is not in the vendor's best interests to get drawn into detailed discussions on system functionality because ERP systems, especially Tier 1s, are big and complex and, when demonstrating to a mixed discipline audience (Finance, Sales, Operations etc), there is simply too much ground to cover.

So, ironically, the more money that a company is looking to spend on an ERP system the less likely they are to see an actual demonstration of it working. It can actually be argued that these demonstrations and presentations serve no real purpose but both customers and suppliers like them so the question becomes how to make them as useful as they can be.

The key to success lies with the ITT and in the review of responses to it that were discussed in Part 2 of this series. That review will have identified functionality gaps or other concerns (if it didn't, then there should be concerns about that, because all systems have weaknesses), and now is the time for prospective suppliers to demonstrate, or at least explain, how those deficiencies can be overcome or remedied. These are actually great opportunities for both customer and supplier, because it allows the former to gauge how well prospective suppliers understand their business and their problems, and it allows the vendors to display both their knowledge of their software and their ability to come up with creative solutions to customer problems.

Regardless; the better prepared the customers are, the better the outcome is likely to be. The next stage will be selecting a preferred supplier and moving to the contract aware stage and Part 4 in this series will deal with that. 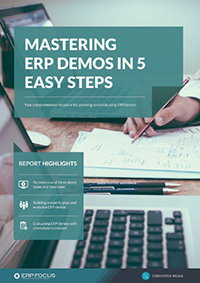