4 common ERP user gripes and what to do about them

Granted, keeping ERP users happy is not easy, but understanding user feedback and acting on it isn’t particularly difficult either. Nevertheless, given the human condition, the effort necessary to deal with a complex company-wide system typically triggers all kinds of user gripes. Here are some of the more classic complaints.

1. System change is affecting my work

This complaint is usually heard about mid-way through a pre-launch training cycle, and typically experienced at the point where new information becomes nearly overwhelming for ERP users. The condition is entirely reasonable if you consider it for a minute, since everyone involved is essentially doing two jobs simultaneously. The first job relates to executing the ‘old way’ of doing things because the enterprise still has to operate on a daily basis; while the second job relates to accepting, comprehending and assimilating a ton of new operational information at the same time.

In this case, the best way to proceed for all participants is to take a break for a week or two, then come back to pre-launch training, if for any other reason than to allow new information to settle intellectually. Typically, this mid-point break gives everyone a bit of a breather leading to the tendency toward a ‘second wind,’ and offers an opportunity to clarify queries without everyone feeling under too much pressure before the final push to implementation begins.

2. The implementation process is too complex

By their nature ERP systems are complicated, but as the old saying goes; ‘one can’t make an omelet unless one breaks some eggs.’ In this event, there are two ways to deal with the complication issue. On one hand, encouragement of an early acceptance of the depth and comprehensive character of these systems can make the road considerably smoother, on the other hand, sometimes it is best to simply teach ERP users the ‘come hell or high water drive on’ approach.

given the human condition, the effort necessary to deal with a complex company-wide system typically triggers all kinds of user gripes

Personally I like the early education approach better since it tends to create a more collaborative result, gain consensus and get everyone on the same page. However, if time is short and getting an ERP system up and running sooner rather than later is crucial, a manager can simply challenge a workforce. In the latter case, if senior management has been doing its job, while the complaint quotient will clearly trigger some whitenoise, good people lead by effective managers can typically quell any problems.

3. ERP implementations are too time intensive

This complaint usually goes hand-in-hand with issues of complication. Let’s face it, to get an ERP system up and running, significant time must be spent. Even if everything works exactly as expected, more time, rather less, will be expended on a system as go-live approaches. Again, navigating a workforce through this kind of issue challenges any management cadre, but if an enterprise workforce has been trained properly, getting the job done effectively will usually end up being more a matter of individual consideration, rather than flogging the troops like a herd of rented mules.

4. Why haven’t we seen a return on investment yet?

This complaint is usually heard from senior-level ERP users, and is typically voiced by CFO’s or COO’s to third-party partners or responsible IT line managers. In this case, there is a degree of trust required by all parties involved since, new ERP systems tend to exhibit a lag trend between start-up and 90 days; where training and operational issues are being put to bed, and system data is not producing quite enough reportable information to measure the system’s overall business value. Once again, the best course to take is to regularly measure the stability and depth of end-to-end activity. Although one may not be able to necessary garner much in the way of new information, at least the platform will be able to illustrate that ‘something’ is going on, while preparing for the first comprehensive enterprise reporting run. 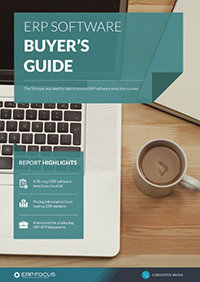 Save hours of ERP selection research with this comprehensive buyer's guide