Home / Strategy / Does your ERP system need a service?

Does your ERP system need a service?

Your car probably works hard for a living. You rely on it and depend on it. Consequently, at regular intervals, you will put it in the hands of people you trust to check it over and make sure it is running correctly. At the same time, they will re-tune it for peak performance.

ERP systems are not cars. One difference is that lives may be at risk if the latter fail but only livelihoods are jeopardized if the former fail. We need to use the word 'only' with some circumspection here: try telling people that their company is 'only' closing and that they are 'only' losing their jobs. The analogy remains valid, though: ERP systems require regular servicing (and maybe even a yearly inspection) to ensure that they are running correctly.

“How come?”, you ask. “Surely software just keeps ticking over, at least until we hit a bug or problem, and then it just needs fixing.” Well, you could perhaps say the same thing about your car; that you should just keep on running it until it stops (or, in the case of a brake problem, fails to stop). But would you advise that? Probably not. So what can go wrong with an ERP system, especially one that may appear to have been running contentedly? Well, let's look at some possibilities.

For the moment, let's assume that your ERP system was implemented with the help of consultants and system integrators who were knowledgeable and competent (though more on that later). At the time that you implemented it, you will hopefully have been advised of what that particular system can do, what it cannot do and what it cannot do very well. You will then have made pragmatic decisions about how to use it, bearing in mind that all package software requires compromises.

However, most ERP systems are updated at least yearly. New functions are added and sometimes old constraints removed. That opens up possibilities for improvement in the way that the system is used and in the results that it can generate. The advice you were initially given wasn't necessarily wrong but it was very likely constrained by the tools available at the time and perhaps those constraints are no longer valid.

Frequently, when a new ERP system replaces something that has not been working properly for some time (or may never have worked properly at all), all the users ask for, and want, is something that works. Their expectations are limited to a reduction in the pain they have been suffering. But if your new system has been in for a year or two now, and has settled down, you perhaps are already thinking of pushing back the boundaries. Are there areas that you did not include in the original implementation because solutions to these problems seemed beyond reach? Were there things that you would have liked at the time that the budget just would not stretch to? Have times changed? Have people's expectations changed? If so, then perhaps it is time to revisit those expectations to see if they can now be satisfied: which leads us to point number 3.

As mentioned in point number 1, when originally implementing the system, it is likely that you were guided by the system integrators and consultants who were working with you. You will have been, to a greater or lesser extent, reliant upon their expertise and knowledge of the system. But these people, regardless of the fees they charge, are rather like the curate's egg; good in places.

Avoid problems at go-live with our free ERP implementation guide

Were the people that you worked with as good and as knowledgeable as they should have been? If they were not, then the advice that you received was not as good as it should have been either. Even if you had good consultants to work with, they may have been new to your company and maybe even new to your industry. You will both have started out from a position of knowing little about each other's patch; you of their software and they of your company. Under these circumstances, unless great care was taken, the risk of making bad decisions would have been high, particularly if either party was inexperienced. (In fairness to consultants, they frequently work under constraints of both timescales and budgets and are frequently not allowed, by parsimonious clients, to do the job they are capable of.)

Finally; you will also have made decisions on 'static' data, like batch sizes and lead times. Times, manufacturing methods and working practices change. With the system up-and-running, now may be a good time to revisit all of these decisions. Are you getting what you wanted and expected from the system? Maybe it's time to get the system up on the ramp and have a look underneath.

Perhaps a dated expression, what it used to mean was the type of training that one received from a job incumbent. The view was that, if you sat alongside a person who actually did the job, you were best-placed to learn how to do it. A few years down the line from implementation, it is quite likely that a few of your people will have 'sat with Nellie'.

There are many reasons why 'sitting with Nellie' is not ideal but I will restrict myself to just a few:

Frequently, at a managerial level, you will not even know that these deviations from recognized procedures are occurring. Do you have time to police and audit the use of the ERP system? Almost certainly not.

By this I mean that times change. The company starts to do new things, or old things in new ways. Companies are living, dynamic organisms. They change over time and their needs and wants change with them.

Systems are less so. They do change (see point number 1) but they do not automatically change and evolve hand-in-hand with the way the company changes. Manual intervention is called for in order to ensure that the system remains tuned and relevant to its environment. Failing that, you will gradually find that you have a system that is perfectly suited to yesterday's requirements when what you actually want is it for it to be suited to tomorrow's.

Having established that your system may benefit from a service, we now have to consider who is best placed to carry it out. There are three obvious candidates: your original consultants, new consultants or your own in-house team. Let's look at the pro's and con's of each of these.

A. The original ERP consultants

There are several reasons why these may be best:

Most mainstream ERP packages are now sold by 'resellers' or 'partners' of the software authors, or by one or other of the large 'system integrators'. If you are unhappy with your original consultants, there may be opportunities to use others who are conversant with your software. Pluses include:

C. Your own internal team

Depending on circumstances, you might even opt for a mix of the above. One thing is for certain though; with each passing day, the need for a proper service increases, as does the cost of operating a system that is not as good as it should (and can) be. 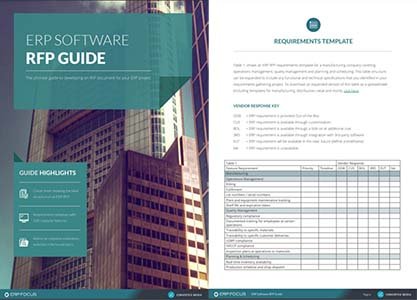