4 Disruptive Trends in the 2014 ERP Market

Back in the day, after newspaper stories suggested that he was ‘Ferite a morte’ (wounded to death), Mark Twain is reputed to have opined, “Reports of my death have been greatly exaggerated”. In the same way today, many have suggested that ERP, and its legitimacy in the era of the ‘Cloud’ has also been challenged (aka ‘new and improved distributed computing’, but that’s a different conversation entirely). Nevertheless, as a practical matter, ERP ain’t going anywhere, while at the same time, still experiencing significant disruption due to ERP trends in 2014.

As a result, we thought it might be helpful to illuminate just four of the ways that ERP specifically is being changed forever.

‘Stovepipe this’, is probably a fairly colloquial approximation of how ERP disciplines are being turned upside down since mobility, and its associated communications capabilities have developed further as an ERP trend in 2014. In the case of ERP specifically, however, the newly-found ability to communicate and manage information horizontally rather then vertically, has caused major ERP developers to re-think how the world ‘actually’ works. Consequently, the stovepipe is on the way out, and is quickly being replaced with more homogeneous ERP systems that ‘talk, index and respond’ directly to the needs of the provider/customer loop everywhere, all the time.

Call it what you will, but the ‘Cloud’ has become intrinsic to global business so we may as well accept the reality. Consequently, in the same way that mobility has altered the face of real-time information receipt, delivery, storage and reporting, the growing ‘Cloud’ ERP trend has extended the same kinds of flexibility to ERP systems by allowing access to previously unavailable network stores. This has, in turn, helped the demise of the stovepipe further, creating more and more active grist for global customer tracking and information mills.

The original AGILE management doctrine appeared in 2007, and the approach was initially focused on more efficient IT development in around the bowels of an enterprise’s tech landscape. However, in the last couple of years AGILE front-ends have begun to appear in concert with ERP, particularly in the case of ORACLE’s AGILELight system, and AGILE SAP. These systems attempt to overlay and integrate AGILE-based quick-requirements/development values, in order to create better ways to programmatically project and manage the implementation and growth of large-scale, resources-based systems.

“More is always more”, as the unknown bard might suggest. This assertion is clearly applicable when it comes to Big Data and ERP, since the melding of old school resources management disciplines, with today’s pervasive back-end cataloging of customer and other resource-based information elements are today’s cat’s meow. Snark aside, however, Big Data is highly useful for creating seamless channels between mobility, the cloud, and smart front-ends which kind of closes the loop on our four-play disruption discussion.

Nevertheless, to end the way we began, disruption ERP trends are going nowhere but horizontally, and rightly so, since ERP as a system has always offered more business sense that it’s generally given credit for. 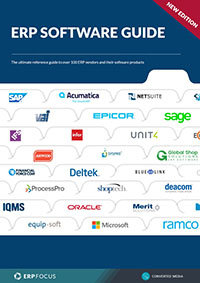