How to Convince the C-Level That ERP Change Is Needed

As a business mentor taught me years ago, in order to get something substantive done at the C-level one first has to accept a goal driven by ‘buy in, buy in, and more buy in.’ However, while this hoary management axiom may appear to be somewhat simplistic, nothing could be more true since at the end of the day, an agreement to change, upgrade or retro-fit an already costly integrated ERP system always comes down to money, and money doesn’t move inside an enterprise unless one or more people ‘buy in’ first.

As an enterprise CIO I have seen and experienced this process many times. And even though it may have appeared that I only had to convince a particular CEO of the ‘rightness’ of a large-scale systems alteration, my C-Level peers always had a piece of the ultimate decision as well including multiple COOs, and most importantly CFOs, who in the end of the day, typically operated as financial judges and juries.

Start with Your Managers

However, in order to gain the most traction from the outset, I usually started canvassing line managers first including Directors, and Senior Managers if they weren’t the people who came up with the idea in the first place. The reason for this was simple, because an the end of the day they were the folks who were going to have to deal with whatever ERP change I was proposing on a daily basis.

Recommended reading: Our guide to selling your ERP project to senior management will help you achieve executive level buy-in for new software.

This effort usually started by my asking for a report associated with KPI’s driven by operational efficiencies, followed by more information requests associated with failure densities, since in the latter case, if a system was working as advertised, why would I be dumb enough to change the system in the first place. Assuming that ‘something’ was failing ‘somewhere’ (and there usually was), I would begin to drill-down into the list of needed issues, and after a bit research, a change rationale would begin to appear.

Once I had identified one or more reasonable operational weaknesses in hand, it was usually best to get right to the heart of the matter – money; or more correctly the establishment of a comprehensive ROI, since if I couldn’t create a cost-saving ‘buy in’ metric that made sense in my own head, it would be likely that the CFO would never allow me to pass through the gate either.

Assuming that I got at least a cautionary agreement from the Finance side, if I hadn’t already considered the operational process side, I’d go back to my IT people once again in order to vett and validate the change effort to see if I could get their further ‘buy in,” and if not, we’d work the problem together until we made sense of the complete evolution. On top of that, I would also ask the same team to come up with a manageable set of process plan documents, to integrate within my ultimate proposal, then step down to an even lower operational level by creating an IT-developed OCM or Operational Change Management document in order to gain a sense of what would happen to, by, and for the folks at the cube level, and subsequently gain some measure of early-stage level of effort ‘on the ground.’

Consequently, after all of the research, and all of the ‘buy ins’ consolidated into a relevant and cohesive formal ERP proposal, I would finally ask my bosses EA to see if he/she could find me some time on the schedule to discuss a major technology expansion. Now, granted, I have just delivered a C-Level change-continuum in just 595 words, but in real-time the actual time necessary to get this job done right, typically took anywhere from 12 to 18 months, so instant gratification need not apply.

Nevertheless, as I said at the introduction, working for ‘buy in’ throughout is just as paramount at the C-Level as it is anywhere else, except the stakes are higher. 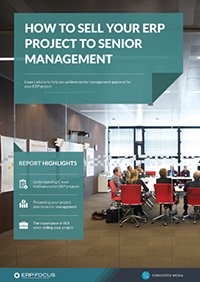 How to sell your ERP project to senior management