How to manage ERP upgrades and avoid costly mistakes

Any projects associated with ERP upgrades and patches are typically fraught with hosts of minefields. First, the commercial viability of any active ERP system must be preserved at all costs; revenue depends on the platform’s ability to execute numerous processes. Second, and perhaps even more importantly, a fully-operational ERP system provides a central, confidence-building defense system against commercial threats that may be coming down the pike; the potential of losing a company’s ability to ‘see the future’ as it were tends to be frowned upon.

That said, upgrades and patches are intrinsic to today’s enterprise technology so rather than worrying about it, here’s a basic and amazingly simple way to ensure that if Murphy’s Law leads you into trouble, you’ll at least be covered.

Granted, this particular header is likely to trigger immediate calls of ‘so what else is new’. But just because the consideration is as ‘plain as the nose on your face’, it doesn’t necessarily mean that the thought isn’t a useful one. After all, plenty of ERP data managers fail to account for this simple recovery work-around when preparing for an ERP upgrade or patch.

Many years ago I worked with an enterprise client who proved to be technologically adept on a daily basis, but regularly failed to ensure that recent backups were available whenever an ERP system upgrade was called for. The manager in question had become lax and intellectually arrogant, believing that just because previous ERP upgrades had gone well, future upgrades would be plain sailing.

In this case, part of his job was to manage an early-stage ERP system that included integrated financial modules both intrinsic to the company’s daily operations, but also central to the completion of a commercial capital round worth millions of dollars. Unfortunately, the manager failed to mind the store and when he authorized a ‘typically nominal’ overnight system upgrade, the platform faltered and created a cascade of failures that ended up corrupting every financial database in the system.

As one might expect senior management was not pleased, particularly since the most recent operational backups available were more than 90 days old. This lead to the manager being fired immediately, the emplacement of a temporary manager (me), followed by the execution of a ‘multi-day, all hands, dark of the night’ workforce effort requiring the manual re-entry of all of the lost data.

In the end, the overall costs to the enterprise were well into the millions in lost commercial capital opportunities, production liability payouts, and hard payroll costs. And what happened with the capital round? The company got the deal done in the end, but the commercial capital provider hiked its interest rates that consequently ended up costing the company millions across the term of the commercial loan. In their view the rationale was simple; if the enterprise’s management cadre could manage to miss something as simple as proper systems backups, what else might go wrong? 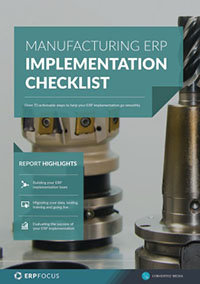 Over 70 actionable steps to rolling out new manufacturing ERP software

The 9 proven steps you should follow when implementing ERP