During the 90s I had an opportunity to do some consulting work in association with a team of RDBMS developers supporting the U.S. Shuttle maintenance program. One afternoon I found myself at the Rockwell plant in Downey, California, reviewing some Oracle work.

The facility was populated with mazes of cubicles and conference rooms, all interlinked by miles of hallways with sparse signage.

Along the central hallway the Rockwell folks had taped a 50 meter-long image of multiple flatbed trailers carrying a single paper systems requirement. Each trailer stood end-to-end, and the document’s impressive length was further enhanced by its 3 meter height, at a total weight of better than 60 tons.

In an attempt to provide some gallows humor, under the image an enterprising engineer had placed a sign stating; “Your taxes at work; efficient production requirements delivered by the pound.”

The cautionary point here is this: there is a significant difference between an efficient requirement that meet the needs of an ERP selection, versus one that is so ponderous that can go sidewise under its own weight.

ERP selection checklists are supposed to be straightforward; with the goal being to only include elements that only relate to the job at hand. However, depending on the enterprise culture, some companies tend to throw everything possible at checklists that can become nothing more than lists of lists, which end up missing the goal of the exercise entirely.

Recommended reading: figure out your requirements for your next software purchase with our extensive glossary of ERP features.

The caution here is simple; when you’re building ERP requirements checklist, ensure that you only include elements that apply directly to well-defined operational needs – no more, no less.

Step by step; module by module

In keeping with the previous ‘just the facts’ admonition, when conforming ERP requirements checklists, the goal is to ensure that only necessary modules apply as part of a checklist matrix. While this suggestion may appear to be obvious, most of the time, in an honest effort to avoid missing salient points, many enterprises ending up skewing their efforts by adding subordinate utility, or affiliate systems checklists that don’t necessarily apply to the critical values of a selection exercise.

So, to repeat, if you are upgrading a multi-module system only include relevant modules which lead to a particular goal-set. On the other hand, however, if you are considering a clean-sheet system, then only necessary modules should be applied from the outset.

What you want is not the same as what you need

Today’s ERP market is rife with ‘new and improved’ product variants, and each of these systems types are usually supported by highly-effective sales teams. However, only a company’s management team can tell the difference between what it needs versus what a vendor’s sales team may want to sell you.

Consequently, when you’re creating your ERP requirements checklist, don’t engage external sales entities until an operational cadre is ready to sign-off by freezing all operational and business checklists. To do otherwise runs an increased chance of being distracted by one or more shiny objects, thereby leading to wrong conclusions and create undesirable operational impacts over time. 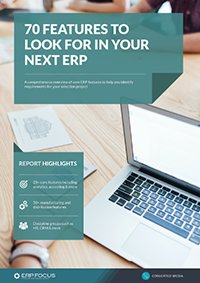