How many of you remember the 1986 Ron Howard film called "Gung Ho"? The story is pretty simple. Manufacturing goes away, small town dying off, and Americans in desperate need of work. The longsuffering hero of the story is able to make the impossible happen, but of course there is deception and a strike along the way, and he almost loses all his friends. But no worries, it all works out in the end.

So, are we "Gung Ho" about reshoring? Because the subject of the 1986 film is still fundamentally the same today.

The general view on American workers, at that time, was that they were lazy, demanded higher pay than overseas workers, and more benefits. So what has changed? A lot.

I have never bought the argument that American workers are lazy. In fact, it kind of puts me on the offensive. I did however believe that it could be done more cheaply overseas. Why? Well, without turning this into an ethics class, let's just say labor laws vary around the world, as does pay.

But, unlike the workers in "Gung Ho", there are real statistics that point toward continued reshoring.

An Environment Where Manufacturers Can Flourish

Mark Crawford, in his article, "Manufacturing in America: Bigger, Better and Bolder", makes some points that I believe are worth sharing.

2. The Reshoring Initiative also states that since January 2010, around 100,000 U.S. jobs have been brought back home.

3. Asian economies were emerging two decades ago, with cheap labor and fewer regulations. That is no longer the case. Labor costs in the places like China are rising.

The other reasons, according to Crawford, that the U.S. experiencing the benefits of reshoring are abundant and lower cost energy, lower transportation cost, better protection against piracy, counterfeiting, and theft of trade secrets.

An interesting observation is that some of the reasoning behind offshoring a couple of decades ago is drawing manufacturers back to the U.S. - Regulation.

The U.S. has been creating an environment where manufacturers can flourish. Technology and innovation within manufacturing has put the idea of operating "clean and lean" within grasp. The development of a manufacturing work force has been supported. State and local governments are providing manufacturing incentives. The effort to entice manufacturers and bring them back is being supported on many different levels, and it is working.

With continued ingenuity, perseverance, and advantageous regulation, it appears that the U.S. will see steady reshoring efforts for a while.

This will lead to the need for new and upgraded ERP software packages to run these modern-day, robot infused factories and facilities. ERP software that appeals to the next-generation workforce with a consumer grade user interface and experience, along with a social collaboration component tuned for business. The first wave of increased demand for enterprise software updates and implementations has been happening since everyone began emerging from the rubble around 2010, and I believe there is a second wave coming - directly related to:

+ The need to compete more efficiently

+ The understanding (and perhaps, realization) that being lean is critical, but an effective ERP (+CRM) strategy is essential to growing top line revenue 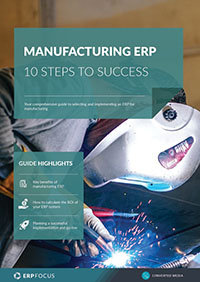