As the venerable axiom suggests, “everything changes’, although enterprise management considerations based on nothing more than a hazy future typically result in one or more costly fool’s errands. As technology managers, this awareness becomes particularly critical in view of operational differences between mature information technologies that drive consistent revenue on a daily basis, versus ‘new and improved’ systems, such as cloud ERP, that are still largely based on evolving methods and mechanisms.

Consequently, this leads us to a value discussion between traditional, locally-hosted ERP front-end systems hybridized with cloud-based back-ends, as opposed to next-gen ‘everything in the cloud’ applications, and if, or when, one might want to think about a holistic upgrade to cloud ERP.

Efficient ERP systems are all about speed when delivering relevant competitive prospect information, since effective sales lead prospecting protects an enterprise’s revenue lifeblood. However, if a CRM manager suddenly finds himself losing business to competitors who have more information sooner, chances are that there’s a hitch in the process somewhere.

Typically, when inbound information is not being trapped and delivered to front-end systems quickly enough, slowdowns usually occur within the myriad of middleware applications that integrate cloud-based databases with a system’s ultimate recipient; the front-end reporting utility. Consequently, if one experiences this kind of situation, chances are one need’s to either trim middleware systems for more process efficiency, or if the integration is entirely log jammed, live with an issue until one can implement a pure cloud ERP system where many previously hybridized middleware processes can be eliminated.

Numbers, numbers and more numbers determine whether an enterprise is growing or sliding backward financially, and when one’s ERP procure-to-pay systems begin to display odd behaviors, or the speed of delivery between cloud back-end processes and front-end reporting begins to get sluggish, it may be time to look at consolidating everything in a pure cloud ERP solution.

In the same way that hybridized CRM systems integrate ‘up and down’ information processes, the same tendencies apply to financial management modules, and particularly those that deal with long-cycle procurement-to-pay contracts that require not only up-to-date financial accuracy, but specific and direct adherence to policy-based controls elements like SOX, or other segment-based regulatory constraints.

As Eli Goldratt’s Theory Of Constraints suggested in 1984, when considering the manufacturing environment, “a chain is only as strong as its weakest link.” While, there are a host of elements that offer value in manufacturing ERP implementations, the timing of information scheduling is undoubtedly the most obvious and problem-prone overall matrix to master efficiently. However, given the evolution of previously completely contiguous client/server ERP systems that have become hybridized in order to create client/cloud ERP variants, this timing challenge has become even more daunting.

In the event of the ‘weakest link’ scenario, systems timing between integrated production elements including; operations and supply chain, to finance and accounting, through project management, and marketing and sales become critical. Should the hybrid system fail to deliver its information-share efficiently, the entire production-event chain can slow to a crawl, leading to overall production inefficiencies, or in a worst case, complete production failure.

Again hybridized timing glitches typically occur at the middleware level, so when a manufacturing ERP system exhibits abnormal behavior, the most logical thing to do is either move the whole herd of cows back down into the client/server barn, or move the whole farm up to the cloud where the cattle can graze efficiently again. That means a complete cloud ERP consolidation, and in this case going up is the only efficient way forward.

At the end of the day, any odd processing behaviors between hybridized back-end to front-end ERP systems typically harbinger problems that can’t be easily resolved until the entire system is operating in a common environment. Consequently, the only way to get the job done is to go backward to a completely on-premise system, or upgrade to a pure cloud ERP that recovers previous process efficiencies, as well as leveraging new values such as elements associated with big data. Granted a migration won’t necessarily be easy or inexpensive either way, but to do nothing will only create a much more costly and challenging problem downstream. 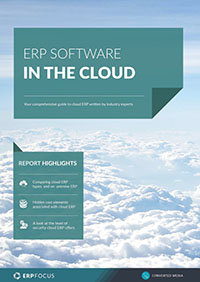 ERP Software in the Cloud

Get your free guide to cloud ERP software