A case study on finding the right ERP consultant

The CEO of Entercorp called an all-hands meeting this afternoon.  He recognized Anne and the crew from Helpful ERP Consultants for a job well done.  Their tasks are complete and next week most of them will be off to some new assignment.  Meanwhile, the people at Entercorp are receiving value from their new ERP daily. To understand how this momentous event came about, we should go back a couple of years and see how Entercorp chose their ERP consultants.

Entercorp began with their requirements for the new ERP and their requirements were well prioritized.  Quickly they realized they did not have all the necessary expertise within their ranks. They did not want to hire experts on a permanent basis since the jobs would be completed within a relatively short time.  Someone who truly understood the needs was the first priority. They interviewed contractors and consulting firms both with no preconceived notion of better or worse. Because they needed a variety of expertise, they chose Helpful ERP Consultants who employed or used their own external consultants and seemed to have the right mix of experts.  The ERP project needed skills including network technology, data conversion, integration, customization, and financial requirements. The Helpful ERP Consultants also worked with several ERP systems, in addition to the chosen product, and Entercorp felt this would be an advantage as there often is more than one way to accomplish needs.

Once Entercorp found a consulting firm that fit their needs, they also needed to ensure that their chosen consultancy firm was available during the period when the ERP project would be implemented.  This requirement should not be overlooked. The top consultants are always in demand and the choice could come to second best or next year.

Ask for references and check them carefully.  The Helpful ERP Consultants provided a list of several satisfied customers.  Entercorp went beyond, performed internet searches, and found other businesses that had employed their chosen consulting firm.  They also talked with partner customers, suppliers, and contacts from industry groups. Any prospective consultant will provide their best list.  Ask open-ended questions to elicit extensive replies. Listen to the replies for between-the-lines inferences and try to follow up as these might provide the best insights.  Develop a standard questionnaire and a score sheet so that replies from all sources are comparable.

Entercorp felt their ERP project was theirs.  While some consultants offer turnkey projects, Entercorp believed they had to be in control.  The Helpful ERP Consultants had many of their needs covered but Entercorp kept the relationship in a way that all knew who the boss was.  In the beginning, there was a lot of conversation about using one of the consultants as a project manager in addition to providing technical and ERP knowledge.  Entercorp chose to promote someone from within to manage the project full-time. That person now has been promoted to be Director of Finance and gained valuable experience managing the ERP project.

Entercorp found they could rely on people from Helpful ERP Consultants for advice and suggestions related to ERP as well as strategic business choices.  This was an important want-to-have requirement in choosing a consultant. Because the team at Helpful ERP Consultants had worked with a variety of businesses, they could often make suggestions and recommendations based on those backgrounds.  As the consultancy firm became more trusted, and their partnership with Entercorp was strengthened, several of their recommendations were adopted into business practices and ERP usage. Clearly, the consultant team were much more than programmers, which was the impression other consultants left.

Helpful ERP Consultants worked with IT personnel from Entercorp to develop the plan for converting data and then to execute that plan.  The legacy ERP used code language not commonly found, and having the support from the consultants in that domain turned out to be an added benefit.  The consultancy firm employed several experts at the beginning of this phase. The number of people needed declined over time and as the project moved on, only one person put in hours as needed toward the end.  Data conversion includes selecting what data should be migrated and then using different techniques to load that data in the right sequence into proper tables. Data conversion works along with testing as often the test reveals some data is not correctly placed in the tables needed.

Helpful ERP Consultants used testing software to robotically run tests repeatedly.  They knew that a red light on any one test could affect another test that passed with a green light yesterday.  Robot software can perform many more iterations than any manual testing. The consultants also used their expertise to help Entercorp users develop both manual scripts and robotic tests that accurately checked system flow in the way Entercorp already did business.  They also coached Entercorp users to stage order to cash test scripts for their management audience. This allows some showmanship to please management. It also lets the boss know that in-house users are performing the tests and developing their own expertise in the new ERP.

Entercorp wanted all the trainers to be super users who had helped with other phases of the project.  The consultants would not stay forever. Showcasing the newly developed talent of those users helped position them as go-to experts who would help other users into the future.  The Helpful ERP Consultants provided a training consultant to help those super users become better teachers. Users throughout Entercorp were very satisfied with the training they received.

The day to shut down the legacy ERP and begin using the new one came along.  The Helpful ERP Consultants played a valuable role during these few days. The consultancy team were on site with IT, sales, finance, production, engineering, shop floor, and everywhere there were users.  Even best conversions will surprise us with something unexpected. Entercorp users were well trained and able to overcome most obstacles. There were some that had not been tested and the consultants were on hand to work beyond those once-a-year occurrences that always appear at the wrong time.

Your business is unique as is Entercorp.  These are some of the important criteria Entercorp used to choose their ERP consultant.  Your criteria will be different but hopefully you have a better idea of how to proceed. The Helpful ERP Consultants will be back to help with other projects – they proved their ability to add value to the process.  Entercorp knows their users and managers are capable now to manage their ERP and use it as a set of tools to achieve their goals. 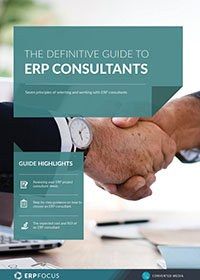 The definitive guide to ERP consultants

Seven principles of selecting and working with ERP consultants