Home / Strategy / ERP and serverless architecture: getting ahead of the curve

ERP and serverless architecture: getting ahead of the curve

In the beginning, commercial computing was largely oriented to the use of a ‘distributed’ approach to control, storage and management of data within an enterprise. During that era, dumb workstations ‘polled’ mainframes, then the larger units ‘talked’ back, all the while harboring most significant processes within the mainframe’s core logic, and/or utility centers.

After that, client/server systems came to the enterprise; where ‘smarter’ workstations took part of the data processing load, while other elements stayed resident on the server-side. Then, of late, cloud-computing has taken the lead in enterprise computing supported by ‘smart’ software systems such as SaaS.

And now, in what some say is a ‘return to the future’, the concept of ‘serverless computing’ has emerged to throw its hat in the ring. However, as we seen over the last 40 years, things in enterprise computing have rarely stayed static for very long, even though the basic approach to serverless is much more akin to original mainframe architecture than it is to anything that is truly new and improved.

Nevertheless, ‘serverless’ is emerging, and ERP folks want it; even though many of them don’t clearly understand what it does. So, we thought we’d offer a very short discussion regarding the technology, in hope that as today’s host of global marketing machines spin up, you may be able to establish a better understanding of what you’re being offered next.

What ‘serverless’ is, and what it means

First and foremost, there are plenty of servers involved in serverless computing. As a matter of fact, there will be more, rather than fewer servers involved with ERP processing, since the architecture is based on; wait for it; ‘distributing’ resource-based loads across a larger, and ‘smarter’ network of parallel systems.

This means that if you are a multinational, operating many integrated ERP modules in various locales, you won’t necessarily be executing processes within a single network, or a single server farm. Instead many internal components will share some part of the overall processes load.

To look at this statement in a different way, let’s look at the formal definition of serverless computing: “Serverless computing is a cloud-based execution model, in which a commercial cloud provider dynamically manages the allocation of machine resources.”

In practical terms, this means that you’ll never know exactly where your datastore will reside, anymore than hitting the Enter key will cause your data to move through a single and consistent point of processing. Instead, a commercial provider’s internal systems will dynamically ‘decide’ what processes execute where, how, and in some cases, when.

‘A return to the future’?

Some see the advent of ‘serverless’ as being a ‘return to the future’. This is because, regardless of all the whiz bang ‘smartness’ associated with today’s cloud, when it comes right down to it, all that is going to happen is that we’ll move back toward centralized computing, where everything will again be dependent on a single operational center, or in a worst case, a single point of failure.

Now personally, I don’t care for the idea of putting all of my ERP eggs in the same basket; but that’s just me. You on the other hand must make up your own mind about this architecture, and whether it’s going to be right for your enterprise.

Either way, please be heads up, because it’s always better to be a bit slow on the uptake, while doing business confidently, rather than blindly racing ahead before any of us are necessarily able to see where we’re actually going. 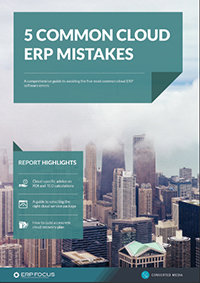