‘Lean manufacturing’, sometimes referred to as the ‘Just-In-Time’ (JIT) production doctrine has been extant in the consumer development sector for many decades. However, once ERP software systems emerged in the 80s, early attempts to integrate JIT with ERP tended to cause production friction between ERP’s original, but somewhat hierarchical constructs, versus still highly-flexible approaches offered by JIT’s intrinsically thin supply-chain doctrine.

Consequently, from a business segment perspective, for a time the two disciplines tended to evolve on a mutually exclusive basis. Over the years, however, the need to integrate JIT with ERP gained more momentum, and this focus ultimately fostering several evolved and fully-integrated methodologies, plus affiliated and ERP-compliant toolsets including Six Sigma, Agile, DevOps, Kaizen, Kubernetes and Mesosphere, not to mention Chef, Puppet, and others.

What is interesting is that each of these evolved methodologies, plus their follow-on products still represent JIT’s original business goals today, in the same way that they existed in the past. To wit:

"Committing to change and continuous improvement is often more challenging than people expect. Methodologies like JIT and Total Productive Maintenance (TPM) require organization-wide changes in mindset and workflow that truly test how agile your organization actually is." Bryan Christiansen, CEO of Limble CMMS.

Today, the goals of ERP and JIT are entirely compatible and particularly applicable when it comes to small and mid-sized enterprises. Each list element represents a direct value point that either creates revenue, or reduces cost throughout the universal manufacturing chain.

This belief is becoming more-accepted of late, including hosts of notable market research firms including Boston’s AMR Research.

According to the firm’s Senior Vice President, Jim Shepherd, "…there is a 25-year history of people believing that lean and ERP were fundamentally incompatible" he said.

“But the reality is they are nowhere near as incompatible as people have tended to think. There is no mystical significance to these terms that make them incompatible with ERP," says Shepherd, “…though ERP stakeholders must be properly educated and trained to understand lean basics. It is important to know that lean production concepts can be implemented without manufacturing ERP (or other types of technology systems), just as ERP can be implemented without lean.

A history of misunderstanding

That is also where the misunderstanding sprang up that lean and ERP technology are mutually exclusive. Just because each can be used in the absence of the other, does not mean they do not play nicely together. In fact, an increasing number of midmarket ERP software packages specifically target lean manufacturers and say their systems enable lean practices.

QAD Inc., for example, has promoted lean for more than 20 years, making it one of the earliest enterprise software vendors to espouse lean-ERP,” he concluded.

According QAD’s Phil Friedman, “…(manufacturers) have a huge need to be more effective and efficient. They need to maximize people and raw materials, (and) they need to maintain margin and quality…(in the past), you could do everything based on visual cues and kanban cards," he said.

"But it's a much different world now, especially with global supply chains. The truth is you need an ERP system today."

Oddly enough, we think so too. 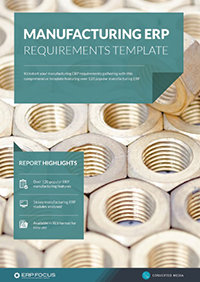 Over 120 critical manufacturing ERP features in one downloadable spreadsheet