Any useful ERP platform requires the compliance and execution of a range of feature sets ranging from comprehensive accounting, to inventory, warehousing and logistical components. However, for a government or public sector ERP, these critical elements are enhanced by the application of more specialized requirements.

This is largely due to legal, regulatory, and policy standards that are not applicable in the private sector. Consequently, we thought you might enjoy reviewing four of the more important feature differences between civil and government ERP platforms.

Beginning in the mid-90s with the Clinton administration’s interest in updating government paper record handling, followed by the Bush administration and its general movement toward update the Federal bureaucracy to leverage more efficient digital information processing, data transparency has become critical to the efficacy of governmental operations. Part of this rationale relates to the sheer practical density of records handled on any given day.

With the Obama administration’s interest in information transparency, in 2008 the gate was flung open wide by calling for enhanced and more granular processing that fostered dependencies associated with binding individual record densities with various overarching policies. Today, in the realm of government ERP, all major systems number transparency as a critical feature.

In parallel with considerations regarding data transparency, government ERP and public sector ERP also require an intrinsic ability to create, store and deliver policy-based information as a core feature requirement. In this event, the elemental module behaves similarly to civil business rule indexes, although in the case of governmental operations, the policy datastore must be much more comprehensive than its less granular systems brother.

As one might expect, governmental data-handling requirements are typically dense at the records level; and depending on a particular department or agency, the need to scale up quickly represents a core feature element. This need for scalability is further challenged by a secondary need to operate on a project by project basis, thereby calling for an endemic dual-driven operational capability.

Prior to 2014, a necessity for internalized, or native, security features were largely limited to various password and/or record locks, whether the ERP system was applied to civil, or public sector operations. However, with the advent of ISIS in addition to numerous black hat hacktivist organizations such as Anonymous, Wikileaks, and the former LulzSec who were and are committed to disrupting digital business and governmental operations on a regular basis, more comprehensive security components have emerged, within the government ERP space.

These systems components exist at the codebase level, and are designed to intrinsic to the system as a whole. The goal is to marginalize and/or eliminate threat vectors before they can be subsumed within the platform itself, thereby establishing more coherent end-to-end system stability throughout the full life-span of its use.

Of course, these four elements represent just a small sampling of a much more discrete list of public sector, Federal, or Municipal in the case of ERP features. Consequently, if you are considering implementing new software please ensure that you are completely versed on what is and isn’t relevant to your operations. 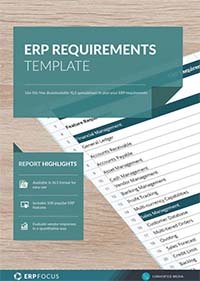 Plan your ERP selection using our requirements template with 100 features in an editable spreadsheet. Include special requirements and extra detail in this exclusive template.