Home / Implementation / How to Calculate an ROI for Your ERP Consultant

How to Calculate an ROI for Your ERP Consultant

Defining a set of accurate Return On Investment (ROI) metrics regarding the engagement of an ERP consultant can be a somewhat difficult path to tread. This is especially the case when approaching the task without understanding the constellation of ‘all-in’ business elements that lead to a final financial value.

It should be noted at the outset, however, that with the exception of senior or C-level financial managers within an enterprise, most line resources managers don’t typically take the time to clearly comprehend the impact of ERP consultants on enterprise ROI. At the end of the day, any successful enterprise or divisional business formula comes down to a question of hard/soft costs versus total resultant value. In other words, did the paid-for value of your ERP consultant move the project forward positively, or was the experience more of a Pyrrhic victory.

An ROI analysis can typically be broken down into three to five necessary and highly-measured project cost elements, such as:

This element can be more grossly stated as the ‘what one used to pay, versus what one pays now’ rule. Typically subordinate elements of this type are defined as:

Each of these elements would then be directly associated with a dollar value, ultimately resolving up to a set of “before consultant” and “after consultant” totals.

This element is more of an ad-hoc or soft cost; although to completely understand the impact of an ultimate ROI one should include ‘anything and everything’ associated with an ERP consulting project. Consequently, subordinate elements here can include:

Again the goal is to define a final delta between before and after, however, this particular element will typically define itself as a pure cost. Nevertheless, cost is cost, and applies directly to the final ROI associated with an ERP consulting project; so don’t make the mistake of believing that this element represents an apple v. orange conundrum, because at the end of the day, it doesn’t.

This element can sometimes be associated with Project Expenditures, but to clearly understand where the money went, one has to account for why one pulled the cost trigger during an ERP consultant selection process. In this case, subordinate costs involve:

This element is another pure cost element but again necessary to the calculation of a solid final project ROI.

This pure cost element may appear to be obvious, but one would be surprised by the number of ERP line managers who don’t understand implementation costs, and their implications on a final ERP consultant ROI. In this case, sub-categories typically include:

Finally, we come to on-going cost requirements - a critical element in any accurate project ROI. This is a particularly necessary element these days given the advent of cloud-computing, and its cost landscape associated with ERP. These cost components include:

Once one has defined both a general value delta between before and after, and then apply follow on pure cost elements, ultimately calculating and defining a final all-in ROI becomes much easier to deal with. 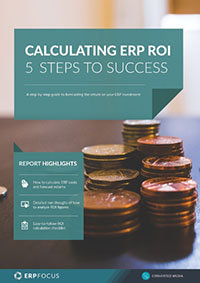 Calculate your new ERP's financial benefits with this comprehensive guide