When companies have operations in more than one country, they have challenges that make the selection and implementation of an ERP system even more difficult than usual. Sometimes that leads them to run different systems in different countries, with consolidation at a General Ledger level only. Doing so allows each country or operating unit to choose their own system and there are advantages to this; not least in terms of system 'ownership'. When systems are chosen by Head Office, there is often the feeling in operating units that a solution is being 'imposed' on them, particularly if they had no role in selecting it, and that can cause them to regard a successful implementation as not being their responsibility.

But there are also significant disadvantages such as increased costs and an absence of standardized ways of working. When companies are looking at whether the best option for them is to have a common system or to have separate systems, there are a number of things to consider. Potentially the most serious are regulatory requirements, which can differ from country to country. For example; in some countries LIFO (last in, first out) costing is not acceptable, whilst others apply VAT (Value Added Tax) and not all ERP systems can as yet cope with that. But considerations don't stop there.

It is generally unrealistic to expect people to work well with a system that is not showing them data in their native language and, indeed, for many it would be impossible. It may be that management at your foreign subsidiary speaks English but it would be unwise to assume that people doing things like warehouse transactions and order entry do. But language considerations go further than just data. Screens and prompts need to be in their local language too and, where on-screen 'help' messages are available, these also need to be intelligible. Likewise, training materials and manuals; because learning a new system is one thing but learning it in a foreign language is something else entirely.

People need support when things go wrong, and things always go wrong. Companies handle this in two main ways. Some rely on the business partners who helped them implement the system; especially when those partners have support teams in all of the countries in which the software is being used. But this can be a problem when there are no local support resources and all that can be offered is either support in a foreign language or support from a different time zone. Neither is ideal, so some larger organizations have their own regional support teams in-house. There are many advantages to this, beyond just giving front-line support. These teams can, for example, sometimes offer out-of-hours support to companies in different time zones but the big advantage is that they can become 'centers of excellence' and contribute greatly to reviewing, testing and rolling out new functionality. They become an internal consultancy team, helping to establish and spread best practice, and they are an ideal resource to help with implementations at new acquisitions.

But trying to support a system that is running across multiple sites is incredibly difficult when modifications have been made at a local level and business units are running different versions of the software or have different procedures and ways of working. The best approach to ensuring commonality in these areas is for representatives of all business units that will be using the system to come together to agree and develop optimal processes and procedures. The cross-fertilization of ideas they will result is often as valuable as the new system itself.

The amount of data commonality that can be achieved depends very much on how the company operates. If all operating units serve different markets with different products, then it can be as limited as a common Chart of Accounts structure to allow consolidation of financial data. But, when the products made or sold in several regions are broadly the same, there can be very great opportunities to be exploited.

If companies share customers, even at a customer group level, using common customer numbers in their sales and finance systems will allow enhanced credit control. Similarly, if they have suppliers in common, they may be able to leverage that to obtain better discounts; perhaps even by consolidating the purchase of some items at the operating unit closest to the supplier.

Having common part numbers also has appreciable benefits because not only does it aid consolidated purchasing but it allows surplus materials to be moved around and, in a similar vein, emergency shortages to be addressed quickly.

In addition to the ad hoc trading mentioned above, some divisions within the same overall group may trade with each other regularly: for example when one is effectively a subcontractor to the other. When the two companies are in the same country, it may be possible to handle the transfer of items by simply attaching appropriate General Ledger account codes to a movement transaction but, when they are in different countries, they will be separate legal entities and regular sales and payment transactions will be needed. However, even then some systems have facilities for intra-company accounting, in which purchasing and sales balances can be offset against each other; thus simplifying operations and transactions.

Picking the right ERP system is not always an easy task and, even when all of the above have been considered, there are still all of the other things that single-site companies have to take into account: everything from writing a good requirements specification through to picking a good implementation partner. It is not a task for the unwary but thankfully expert help is available and companies are encouraged to begin by making use of the free advice that is available via the blogs on the ERP Focus website. 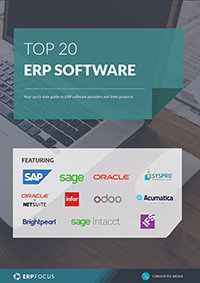